Filled with dried fruit, candied citrus peel, flavoured with mixed spice, and marked with a cross, hot cross buns are an essential part of Easter. But this time we will turn them into a loaf.

You can find a dedicated recipe for buns on my channel in the Breads of Easter playlist. Although, you can use this recipe to make buns too. It is even simpler than the other one.

Simplicity is the main reason for this recipe. Instead of rolling a bunch of buns, we will make a couple of cute little loaves. It will be like eating a giant hot cross bun!

You could even slice, toast, and top it with jam or anything you fancy.

A couple of things to note when making this or any other hot cross bun recipe: Mixed spice contain cinnamon and nutmeg. Both are ingredients which slow down yeast activity. That is one of the reasons why it takes longer to ferment a dough containing them. Sugar is the second ingredient that slows down fermentation, contrary to popular belief.

So, if your kitchen is a bit cool or if your dough is a bit cooler after mixing, then be prepared to leave it to ferment for longer.

For those who are not familiar with mixed spice or candied peel – Mixed Spice is a powdered spice mix which contains cinnamon, nutmeg, coriander, caraway, ginger, and cloves. Candied peel is a mix of lemon and orange peel that is cooked in sugar syrup. It is also known as mixed peel. Both ingredients are commonly sold in supermarkets here in the UK.

If you would like to make buns instead of loaves, then divide the dough into 12 equal pieces during the dividing step. Pre-shape and rest the same way as I show in the video. Finally, shape into rounds and place on a non-stick paper lined tray. The final proof may take a little less time. Bake them for 25 – 30 minutes.

For the crossing paste –

For the sugar glaze –

Bring up to a boil just before the bread comes out the oven. 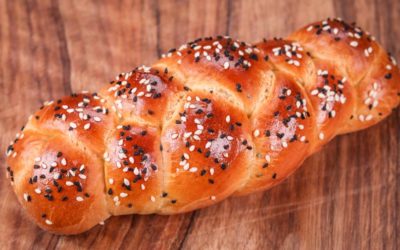 Another great addition to the Breads of Easter playlist. This Armenian choreg will make the Easter Bunny come to your house for sure! It may look like other festive breads because making a braided...

END_OF_DOCUMENT_TOKEN_TO_BE_REPLACED

Merry Christmas and a happy New Year my friends! This will be the last video of 2021. We are going out with a simple little recipe inspired by the classic Gugelhupf. A yeasted cake flavoured with...

END_OF_DOCUMENT_TOKEN_TO_BE_REPLACED

It is a couple of days before the celebrations, and you don’t know what to bake?! These last-minute savoury tear & share rolls will be the perfect solution. The ingredients should be readily...