Why Do You Have to Activate Active Dry Yeast?

Home 9 Principles of Baking 9 Why Do You Have to Activate Active Dry Yeast? 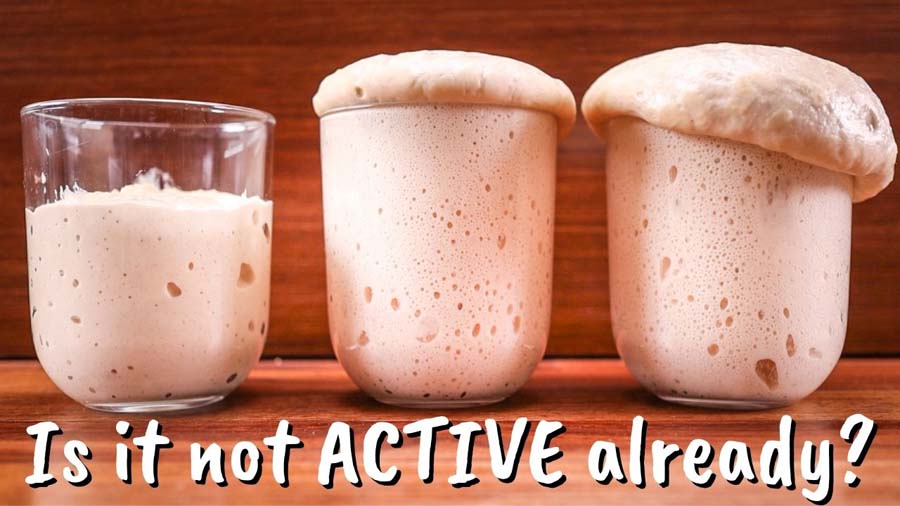 The name may be quite deceiving. But it is true – you should activate active dry yeast if you want it to perform similarly to instant yeast.

All three kinds start their life as cream yeast. A thick slurry of yeast and water.

Fresh yeast is made by pressing the water out of cream yeast reducing its hydration and turning it into blocks which are then divided, packaged, and ready to be used. Fresh yeast must be kept refrigerated to slow fermentation and make it last longer. It can start dying off in just a few weeks even if refrigerated.

Instant dry yeast was invented in the 1970s by French yeast manufacturer Lesaffre. It is the kind of yeast I use in all my videos.

Fresh yeast must be dissolved in water to avoid having lumps of it in the bread dough. Instant yeast can be added to the dry ingredients without needing to be dissolved first. Although, I always dissolve it in the liquid because that just makes sense to me.

Active dry yeast must be dissolved first otherwise it will not get fully hydrated because of its coarse texture. People also call this blooming.

For this test I got some active dry yeast from a different brand. The texture was a lot coarser, and it was apparent that this yeast would need some time in the water fully hydrate. Even the packaging suggested that it should be stirred in warm water and left to sit for 10 minutes.

So, the main purpose of this video was to see what would happen if the yeast was not left to sit in the water for any amount of time before being mixed with flour. I also wanted to see how it would compare to a dough made with instant yeast.

There is a conversion for swapping out instant for active. You should multiply the amount of instant yeast by 1.2. Some say that it is more like 1.3, but I have always used the 1.2 multiplication and it has worked for me. To do it the other way around multiply the active yeast by 0.83.

Let us get something out of the way – you do not need to add sugar to the yeast. If that was the case, then the manufacturer would advise you to do so. Enzymes in the flour will break down starch turning it into simple sugars that the yeast then feeds on. It does not need you to spoon feed it sugar.

In the first test I made two doughs. One was made with active dry yeast that was dissolved in water and left to sit for around 10 minutes until it had visibly become frothy indicating activity. The other was made by just dissolving the yeast and mixing to a dough right away.

Both were made at the same temperature. Of course, the one which was ‘activated’ did get to sit in warmer water to being with giving it an advantage. The final temperature of both doughs was the same at around 25C (77F).

Clearly, the dough made with the activated yeast rose a lot more rapidly than the other one.

So, compared to itself the active dry yeast worked better when it was left to sit in water for a while.

I was not fully happy with the result of the first test since the dough that was made by mixing without activating had risen reasonably well regardless. So, I wanted to compare the rate of fermentation between the doughs in the first test and one made with instant yeast at the correct conversion.

The dough made with instant yeast fermented most rapidly.

Do you have to activate active dry yeast? Not necessarily.

As you saw in the first test it rose just fine. It just took longer.

Saying that, if you want to stick to certain fermentation times given in an instant yeast dough recipe, then you must activate it before you make the dough otherwise it may take twice as long to rise.