Does It Matter Which Flour You Preferment?

Home 9 Principles of Baking 9 Does It Matter Which Flour You Preferment? 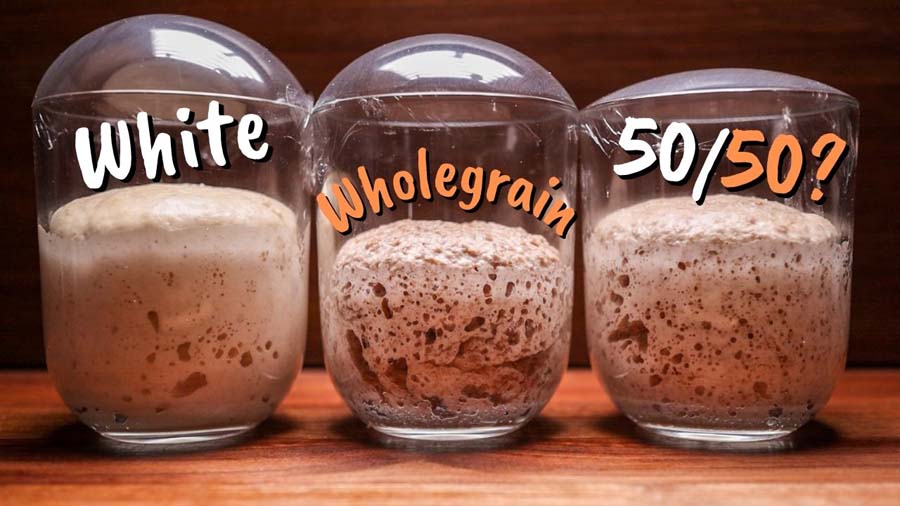 This is a question that I have thought about in the past and a few of you have asked me about it in the comments section too. Eventually I will make a video answering every single question because that is what I’m here for.

More often than not recipes using preferments are made with a couple or even more types of flour. The preferment alone brings great flavour to the final product but adding a mix of flours in the dough can result in an even more complex flavour profile.

We all know how much more flavourful whole wheat or rye breads are opposed to plain white bread. Each to their own of course, but the fact is that whole grains pack a punch when it comes to taste.

Plain white bread can also taste amazing if handled and fermented correctly of course. It is both the fermentation and the type of flour used that affect the final taste.

In this video I compared three breads made with preferments that used different flours. All the breads contained the same ingredients and the same quantities of ingredients.

100g white bread flour, 40g whole wheat flour, 1.5g instant dry yeast, 98g water, and 2.5g salt. All were made with preferments containing 40g flour, 30g water, and a pinch (0.1g) yeast. The ingredients of the preferment were subtracted from the overall formula.

Then the main doughs were made with each preferment, and bulk fermentation commenced. I gave the dough one fold half-way though bulk fermentation. Then a pre-shape, quick rest, final shape, and final proof. All were baked at the same temperature and for the same amount of time.

Whole wheat flour is more nutritious than plain white flour. This extra nutrition can boost fermentation because the yeast has more food to consume. Doughs containing a portion of whole wheat flour generally ferment more rapidly. That is if the hydration is adjusted correctly when swapping a portion of white flour for whole wheat. This is especially beneficial for sourdough baking.

As you can see in the video the 100% whole wheat preferment gained less volume than the other two. There are two reasons for it. Even though the hydration percentage of all preferment is the same, the actual texture of them is different. Whole wheat flour absorbs water a lot better than white flour does. It makes the dough stiffer, and a stiffer drier dough will ferment less rapidly and expand less as it ferments. It does not necessarily mean that the preferment was less fermented.

Once the three doughs were mixed, they all seemed to feel and behave like each other. None of them felt sticker or drier and none of them fermented more rapidly or slowly than the other. After baking the crust on all looked the same. They were all as crispy and sturdy as the other.

I let the breads sit for 24 hours before slicing and comparing. When slicing they felt the same again. The difference in crumb structure and softness between them was negligible.

It really does matter which flour you use in the preferment. If you are aiming for maximum flavour (which is the whole purpose of using a preferment), then you should make it with whole wheat flour or any whole grain flour specified in the recipe.

It is even more important when using natural leavening. The yeasts and bacteria in a starter work wonders when it comes to fermenting whole grain flours. The difference in taste would be much more noticeable in sourdough bread.