This is How Salt Affects Bread Dough 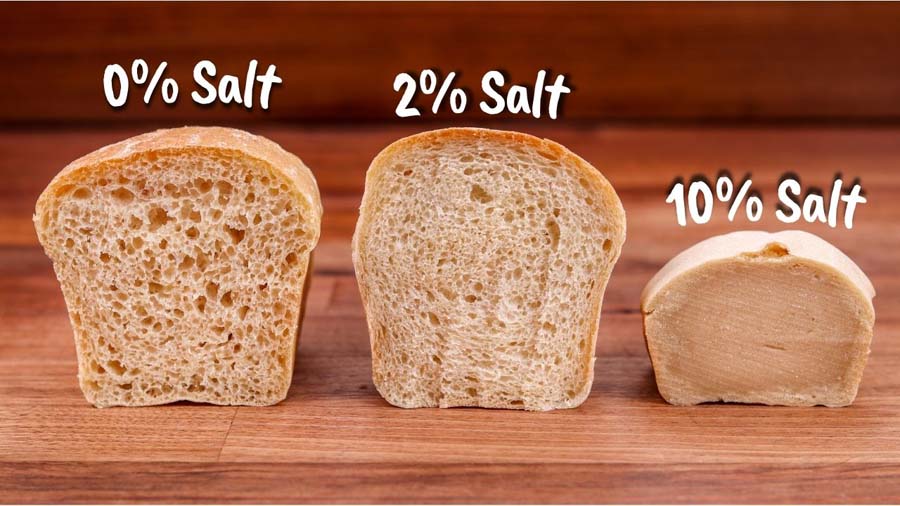 Salt makes up a tiny part of any bread dough, but it has a huge effect on it.

Most bread nowadays is made with salt. I have read that it has only been used in breadmaking for a couple hundred years but seems like someone would have thought of it far sooner because bread has been around for thousands of years. There are places where some bread is still made without salt. Tuscany being one of them.

At only 1.5% – 2.5% of the total dough mass, salt makes up a very small part of a recipe. This tiny percentage affects fermentation, flavour, and texture.

Salt acts as a tightening agent on gluten. It strengthens the dough and makes it more cohesive. As the yeast consumes the maltose made by active enzymes contained in the flour, it expels carbon dioxide. It is the carbon dioxide that gets trapped in the gluten network and makes the bread dough puff up. The stronger the gluten the more gas it can hold. This of course is not a rule that must be followed. Sometimes weaker gluten is preferable. Saying that, a dough without salt becomes extremely weak and can’t hold the gas effectively.

Besides improving dough structure, it also greatly enhances the flavour. Bread made without salt tastes bland. It has no character. Salt not only adds a salty taste, but it also accentuates the flavour of the flour and other ingredients contained in the dough.

Salt helps with controlling fermentation. It draws moisture through the cell walls of yeast through a process called osmosis. Yeast needs water to work effectively. The more dehydrated it gets the slower it will ferment. This is by no means a bad thing. A dough made without salt can ferment too rapidly and uncontrollably. This property of salt can be used for slowing down and controlling sourdough derived leavens and yeasted preferments. It is especially useful in hotter climates and hotter kitchens. Just a small percentage significantly slows down a preferment preventing it from over fermenting.

Salt inhibits enzymatic activity. This is one of the reasons why salted foods can be stored for so long. So, adding salt to a soaker can prevent it from going off. Soakers with grains and seeds often are made with hot water. Leaving a warm soaker to stand at room temperature for many hours can cause it to spoil. I will make a dedicated episode about soakers and how to use them soon. The same salt percentages apply for soakers as well as bread dough and preferments.

Salt helps preserve the colour and flavour of four. Unbleached flour has carotenoid pigments which give the crumb a creamy colour and wheaty aroma. Salt helps with preserving these carotenoids as it delays oxidation. Therefore, it is preferable to add salt at the beginning of the mixing process. Saying that, it is most important when using a mixer as the mechanical action can oxidize the flour a lot faster than hand kneading could. The resulting bread can have a white crumb and a lack of good aroma.

While normally all ingredients are calculated as a percentage of the total amount of flour, if a dough is made up of a large proportion of grains and seeds, then the total salt amount should be calculated in relation to the total weight of the grains, seeds, and flour. This is important for a correct balance of flavour. Grains and seeds absorb a lot of water and dilute the saltiness of the final loaf. Adding more salt will correct this.

Generally, 2% of salt is the standard for most recipes. I almost never stray from that number. It keeps the calculations simple, and it adds enough flavour while keeping the fermentation in check. You can go lower to reduce the amount of salt in your diet. Adding more salt is not necessary most of the time. Only two scenarios come to mind. One being when a soaker is used as described above. The other being breads made with a large proportion of fat such as brioche or certain types of viennoiserie which can contain up to 50% butter. The salt is there to balance out the flavour of those breads. That is why such recipes will also use a larger proportion of yeast to balance out the slowing down effect of the salt and sugar contained in those types of dough.

Lastly, salt contributes to crust caramelization. Since it slows fermentation there is more time for enzymes to convert flour starch to maltose. This leaves more residual sugar that caramelizes the crust.

In this video I decided to show you a couple of extreme examples. One dough made without salt. One made with way too much salt (10%) and the third one at a standard 2% to show you the difference.

Predictably, the dough without salt fermented a lot more rapidly than the others. It was stickier when handled and when baked it spread out sideways instead of rising upwards due to the weak gluten structure. The texture of the crumb was spongy and felt dry.

The dough with too much salt did not ferment at all, so after baking it was just a dense lump of unusable dough. When kneaded I could not get any gluten going. After kneading the dough tore apart easily when pulled.

Unlike in my other experiments where I give options on how to work around certain ingredients and their ratios, this time there is only one answer – you must stick to the standard percentages to get a decent result. There are of course exceptions. You can reduce the salt significantly, but then keep in mind that the dough will behave differently. Adding more than 2.5% salt is pointless. The bread would taste too salty and too much salt in our diet is not what we want.

Let me know your thoughts on this down in the comments. How much salt do you use in breadmaking and why?