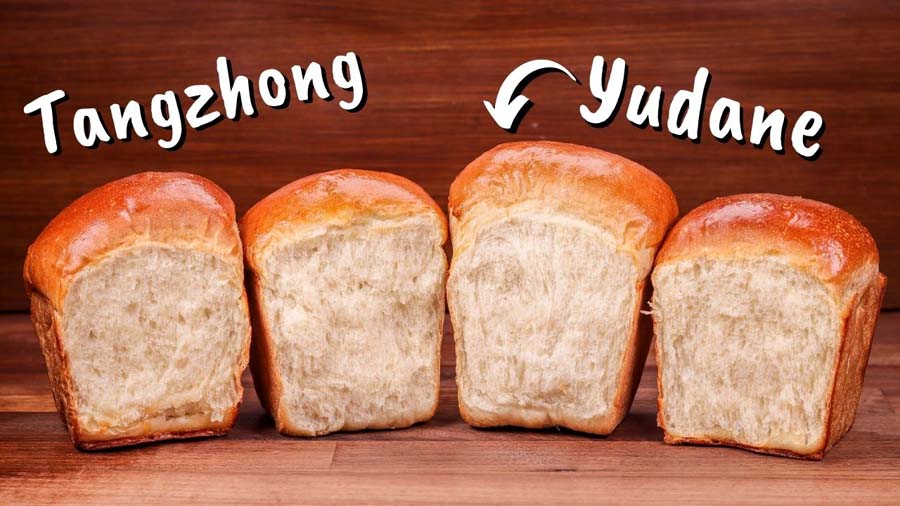 Tangzhong & yudane are dough improvers. Made with slightly different methods, they produce very similar results. In this video we will have a look at how they are made and used in breadmaking.

Tangzhong is a Chinese roux (liquid & flour paste) that is cooked in a pan, left to cool down and added to bread dough. Generally, made at a flour/liquid ratio of around 1:5 (some people make it at 1:4).

Yudane originates in Japan. It is a 1:1 mix of flour and liquid. Instead of being cooked the flour is simply mixed with boiling liquid and then left to cool down before being used.

In both cases the purpose of cooking and mixing with a hot liquid is to gelatinize the starch of the flour.

Starch in flour gelatinizes at a temperature above 65C (150F). During this process liquid is absorbed by the starch which makes it swell up. It is a similar process to how the outside of a bagel is gelatinized when boiling.

Tangzhong turns into a sticky paste while yudane stays more like a piece of glutenous bread dough.

Both improvers will make your bread more tender with a more open interior and they will make it stay softer for longer.

Although commonly used alongside eggs, butter, sugar and other enrichments, these improvers can achieve great results all by themselves. So, they are great alternatives (especially for vegetarian/vegan diets) to those traditional ingredients.

As with other methods, a few minutes of preparation can make a world of difference in the final loaf.

How much of the total flour in a recipe should you use?

Since tangzhong is made with a flour/water ratio of around 1:5, it means that only a limited percentage of the total flour can be used in it because all the liquid will end up in the tangzhong. Generally, only around 4% – 10% of the total flour is used (I went up to 13% in the video).

Yudane on the other hand can be made with pretty much all the flour as I have demonstrated in my tortilla recipe. But generally, it contains 10% – 25% of the total flour.

What considerations are there?

Since both use hot liquid, there will be some evaporation. Not so much for the yudane since the boiling water is weighed right into the flour bowl, mixed and then covered.

The tangznong must be cooked for about 3 – 5 minutes on medium heat, so it evaporates a considerable amount of liquid which must be accounted for to achieve the right dough hydration.

There is no concrete formula that can be used for calculating this amount as different stoves have different settings and depending on how much roux is cooked and what kind of pot is being used, the results can be drastically different.

In the example recipe I added 10g (0.35oz) extra water to the tangzhong before cooking and that was almost the exact amount that evaporated. This was just a lucky guess.

It is best to weigh the tangzhong after cooking to see how much water has evaporated and then adjusting the amount of water in the final dough to compensate.

How to convert any recipe to tangzhong/yudane?

Use baker’s percentage and the given ratios. It is that simple. I’m pretty sure that most bread recipes can be made with either one of these improvers. Try it out in your favourite recipe!

Is there a difference in the result?

I have used both improvers several times and even twice in this video. Yudane seems to make the dough just slightly lighter. The difference in the result is negligible in my opinion. You can use either. For me, the main reason to use yudane going forward is the convenience. There is less washing up, less measuring, and it takes less time to prepare.

If your dough is rising rapidly, then move on to the next step sooner. If it is taking its time, then leave it to ferment for longer.