How Does Sugar Affect Bread Dough?

Home 9 Principles of Baking 9 How Does Sugar Affect Bread Dough? 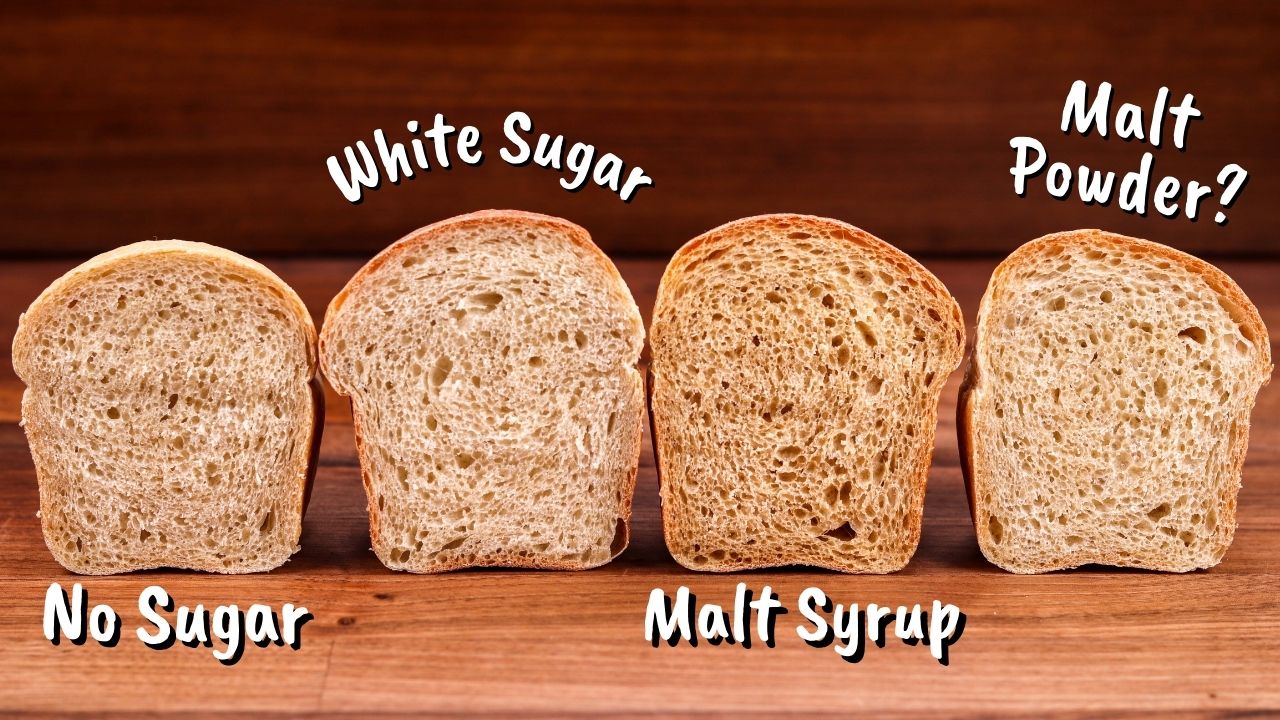 Contrary to popular belief sugar slows down fermentation. I have made a video explaining it already. This video is about the other effects sugar has on bread dough. I will also address an incorrect statement I made in the previous video.

How does sugar affect bread dough?

Sugar acts as a liquefier. It absorbs water, weakens the gluten structure, and makes the dough looser. The dough expands more when baking achieving an airier and softer crumb. It also makes it stickier and a little harder to work with.

Of course, it makes the bread sweet too. Besides that, it makes the crust caramelize faster when baked, so baking temperatures should be adjusted when using sugar.

White sugar is mostly used to sweeten rolls and buns. Dark sugar syrups like barley malt syrup, black treacle, honey or even maple syrup can be used to add colour to the crumb and give the bread a distinct flavour. I personally use malt syrup and black treacle for rye bread as the intense flavour works well with rye and seeds.

While all the sweeteners mentioned above slow down fermentation, there is one ingredient that can help with fermentation and crust colouration, and flavour – it is diastatic malt powder. And now we get to what I got wrong in my previous sugar video. I said that yeast breaks down starch and converts it to simple sugars to feed itself. That is untrue.

It is active amylase enzymes (alpha amylase & beta amylase) which are present in grains that convert starch to maltose. It is what yeast feeds on. Most of the time the flour that we use has enough of these enzymes to make the food for the yeast.

In some flours diastatic barley malt powder is added to boost the alpha amylase as depending on the grain harvest there may be a deficiency of it. This should be stated on the ingredients list of the flour packaging.

We can use diastatic malt powder to help fermentation and give the bread a malty flavour. It is especially useful for cold fermented dough. During a long cold bulk fermentation yeast may go through all the maltose. Adding some malt powder can give it a little boost. Anywhere between 0.2% – 1% in relation to the total amount of flour is recommended. Cold bulk fermented pizza dough is often made this way. Not only for the fermentation benefit, but also for crust colouration.

Sugar extracts water through the cell membrane of yeast through osmosis. Salt works in a similar way. When the yeast loses water, it ferments more slowly. You can clearly see the effect of this in both videos.

In this experiment I decided to compare four loaves. One made with no sugar at all. Another one with regular white sugar. The third one with barley malt syrup and the final one with diastatic barley malt powder.

I chose to use white sugar because it is the most common sweetener in breadmaking. And I chose barley malt syrup to show that it is not the same as using diastatic barley malt powder although they are made from the same ingredient. Barley malt syrup is cooked and processed in a way that deactivates the enzymes which would convert starch to sugar. They are only present in diastatic malt powder.

Saying that, malt powders and syrups can be made from other grains than barley. But barley malt has a superior flavour.

What did we find?

Naturally, both the sugar and syrup doughs were stickier and more difficult to work with. It is not a big deal though as the result that they produce is well worth the effort. The crumb becomes softer, lighter, and sweeter compared to the dough with no sugar.

The malt syrup dough had a distinct flavour and a darker crumb. Both had a dark and evenly caramelized crust.

The diastatic barley malt powder bread also had an airy crumb, but it was not sweet like the others. The crust was also nice and caramelized, but not overly so. Where it did stand out was flavour. It had a distinct malty taste which I enjoyed. The dough was made with 1% diastatic malt powder.

The sugar content of both breads was 10% in baker’s percentage terms. To sweeten dough just a little bit and not add too much sugar into your diet you can drop it down to 5% or even less.