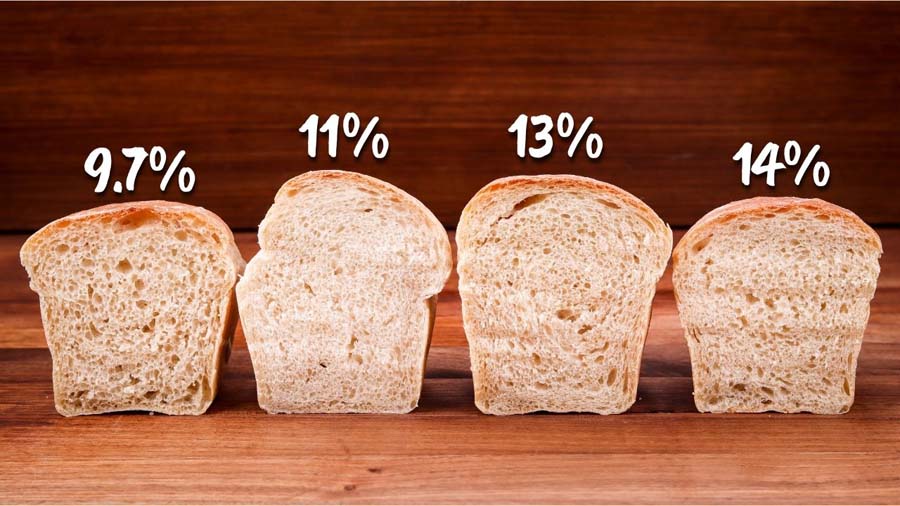 There are two proteins contained in flour that when water is added combine to form gluten. They are called glutenin and gliadin.

Combined they give us the ability to handle and shape breads that are strong and can hold their shape while at the same time being easily manipulated into that shape.

When it comes to wheat flour generally more protein means more or stronger gluten. But there are other properties that come with high protein content. Higher protein flour can absorb more water, it can make the dough more cohesive, stronger, and be able to gain more volume due to the gluten matrix holding more carbon dioxide.

There are many types of flour available, some of them have very specific uses while others can be used in various applications. These applications are determined largely by the protein content of the flour.

Since high protein (strong) flour makes for stronger gluten, it is most suited for breadmaking as it can trap carbon dioxide inside the dough and help it rise more vertically instead of spreading out sideways. The resulting loaf has a larger volume, more open crumb, and chewy texture. It can absorb far more water letting us make loaves with higher hydration. It also is more resistant to enrichment with fats and sweeteners as after the addition of such ingredients it is possible to bring the dough together for full gluten development.

Low protein flour on the other hand creates weaker gluten which is not able to hold carbon dioxide that well, so if used in breadmaking would produce a loaf that is rather flat and more cake-like. This kind of flour is great for light sponges, biscuits, cookies, scones, chemically leavened (soda) breads, etc. The production of such baked goods often includes the addition of eggs, butter, oil, sugar, and other enrichments. Although, in this case they are added for the purpose of even further inhibiting the gluten formation so that the resulting sponge or dough would be even less chewy and lighter.

There are of course exceptions, and you can certainly make bread with low protein flour and cake with high protein flour if you want. Some bakers love using low protein flour for breadmaking as it makes the dough more extensible and able to expand more when baking. This is most suited for lower hydration bread dough since low protein flour can not absorb water as effectively.

Generally, wheat flour found in supermarkets can range from 7% to 16% protein depending on where you live. Anything between 7% to 9% will most likely be called cake or pastry flour. From 10% to 12% you’ll find all purpose or plain flour which as the name suggests is a great all-rounder useful for both pastry and breadmaking.

Anything above 12% would be strong bread flour or even very strong bread flour. All these names will change depending on where in the world you are. The protein content should be a good indication of what the flour is useful for.

Let us not forget whole wheat or wholemeal flour as it is known here in the UK. It is made by milling the whole wheat kernel and not just the middle part (endosperm), which white flour is made of. It is the bran (outer layer of the wheat kernel) that is quite coarse and has a shearing effect on the gluten structure as the dough is kneaded. Whole wheat flour can also range in protein content. The lowest I could find was 9% and it goes up beyond 15%. Same principles apply concerning gluten strength. The more protein the stronger the gluten.

Whole wheat flour can absorb far more water than white flour at the same protein percentage. It is the bran that absorbs it. A good practice is to leave a high whole wheat containing dough to rest for a while before kneading or even perform an autolyse to help it absorb water and make it easier to knead and further develop the gluten.

Quality of protein is another important thing to note. Spelt flour has less glutenin, so it will produce a dough that is more stretchy and less elastic.

Rye flour protein content means nothing in terms of gluten as there is no gluten to speak of. It contains gliadin and glutelin (which is like glutenin), but unlike other flours it also is high in a substance called pentosans.  It competes for water with the gluten forming proteins preventing the development of gluten. Saying that, rye flour is by no means gluten free and should not be consumed by anyone allergic to gluten.

Often, I get comments from people in Asia saying that they have no high protein flour available. There are a few things that can be done to make a dough work with weaker flour.

Reduce the hydration % of the bread dough. You would be surprised how much easier and more effective a low protein flour dough is to work with at a lower hydration level. Especially when the dough is enriched.

Perform more folds during fermentation to build tension. Pre-shape it more tightly and do a tighter final shaping. This will prevent the dough from spreading out sideways too much. There is a risk of tearing the weaker dough so be careful.

Perhaps you can find some high protein whole wheat flour and mix that into the low protein white flour to fortify it.

I hope some of this information was helpful to you. If you would like to add something, please do so in the comments section.