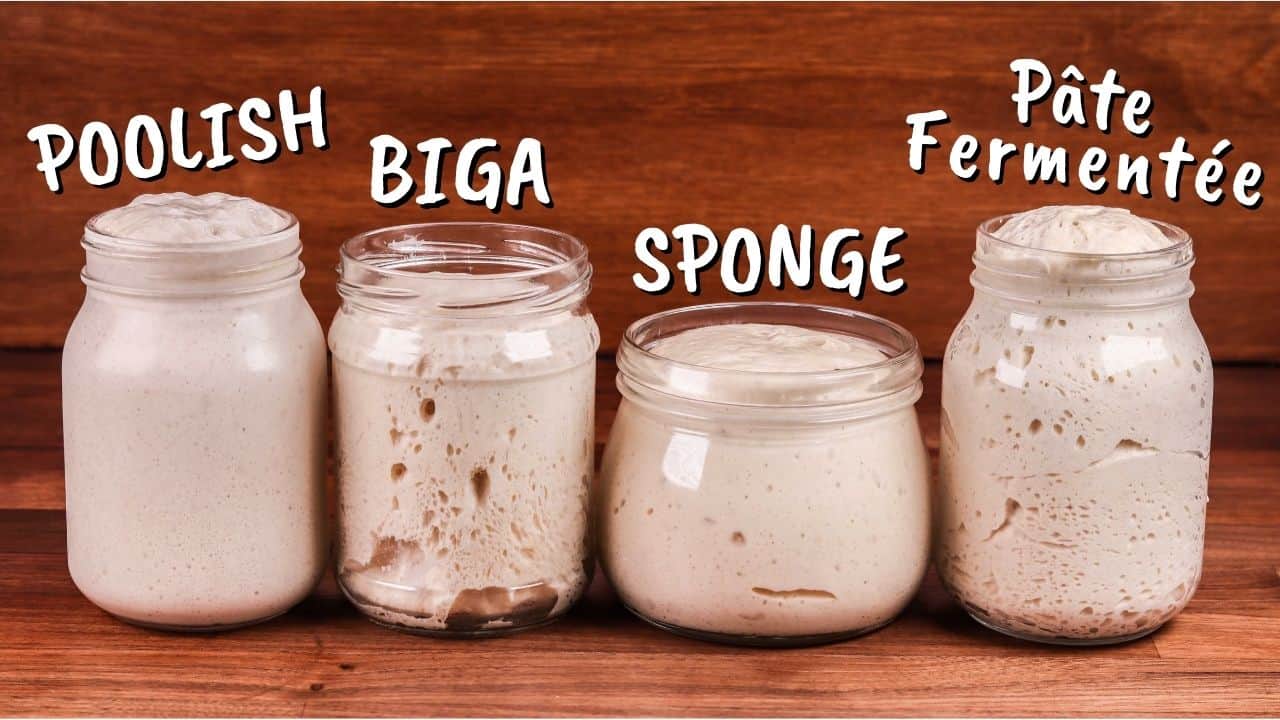 What is a preferment and why use it?

Preferments are made by taking a portion of the total dough ingredients, mixing them together and leaving to ferment for several hours. In most cases only flour, water and yeast are used. There are exceptions like the sponge which can be made with milk instead of water. Or pate fermentee which is the only one that contains salt.

The ripening time of a preferment will depend on the temperature of the environment and the amount of yeast used. A poolish or biga may ferment for 8 – 16 hours or even more.

A pate fermentee being made by taking a piece of a fully mixed dough can take as little as 6 hours.

The sponge is by far the quickest preferment as it contains all the yeast in a recipe. It can be ready in as little as 45 minutes.

Most breads can be made with preferments and most of the preferments can be used interchangeably with some modification.

There are several benefits to a bread made with prefermented flour. The acidity in the preferment can help with strengthening gluten structure making a dough rise upwards instead of spreading out sideways.

Flavour is another major benefit. A slow fermentation creates acids and esters which give the bread a wheaty fermented aroma and a slight tang. Much more complex than any straight through dough.

Keeping quality is another benefit as the more acidic a bread is the longer it will stay fresh. This is especially important for when you are making larger loaves and baking less often. The acids in the bread will prevent mould formation far longer than in a regular dough.

Lastly, the production time of your bread can be reduced when using a preferment. Because it brings so much flavour you will not need a long bulk proof to develop it. By simply mixing a preferment the day before and spending just a few minutes you could potentially save hours the following day.

I like using them as is evident in the Breads with Preferment playlist on my channel. With around 30 recipes using all the preferments listed here.

The yeasted preferments in detail.

Poolish is made up of equal parts flour and water meaning that the hydration of a poolish is 100%. The amount of yeast used is miniscule at around 0.08% – 0.1%. That is 1/10th of a gram per 100g flour. That is why most of the time I do not even write the exact amount but instead I tell people to add a tiny pinch.

Use a whisk when mixing a poolish to be sure that there are no lumps of dry flour left. As mentioned above fermentation times will vary according to the amount of yeast used and the temperature of the environment. It is up to the baker to get to know their surroundings and learning how a preferment reacts to them. Seasonal changes will affect fermentation time so you may want to use more yeast in winter and less yeast in summer.

The high hydration of a poolish makes for more enzyme activity in it and that results in a dough with more extensibility and a potentially better rise in the oven. It also results in a dough that is more difficult to handle. It is commonly used it in baguette recipes.

A ripe poolish will be bubbly on the surface with bubbles popping indicating activity. Little crevasses may form in the middle of a poolish as it is starting to collapse back in on itself. If you see a ‘high water’ mark on your jar far above the poolish that means it has risen and fallen back down. Ideally you should use it at its peak to get the leavening benefit.

Although a poolish can be used past its prime. It is quite forgiving that way because you will be adding more yeast to the final dough so the leavening properties of poolish are not as crucial. What I am saying in short is that you should not worry too much about over proofing. As you will see in the video a poolish is still good to use even 24 hours after mixing and 12 hours after its peak.

The name poolish is derived from Polish as that is where this preferment originated.

Biga is an Italian preferment. It generally ranges from 50% – 60% hydration, but it can go up to 100% as it is a generic term to describe any preferment. Same as a poolish it is made with flour, water, and yeast. The yeast percentage is also the same.

The low hydration biga is more predictable and more forgiving than poolish. You can forget is and combe back to it, and it will not have expired as quickly. A ripe biga will have domed and it can start to collapse back in on itself in the centre.

Because a biga can be low hydration it allows for some interesting recipes. As mentioned above you would generally preferment 10 – 20% of the total dough flour. That would be 50g – 100g of a 500g flour recipe.

But I have made videos about pizza and ciabatta in which 100% of the flour is prefermented. That is achieved by mixing all the flour, 0.1% of yeast in relation to that flour and making it 50% hydration. Leaving that to ferment overnight and adding the remaining ingredients when making the final dough. More water, more yeast, and the salt. Knead it as per usual and that is how to preferment 100% of the flour in a bread dough.

Since biga is an Italian term, most of the famous Italian breads can be made using it. But as with all other preferments it can be used for most other breads.

Sponge is unique in that it contains all the yeast of a recipe and a lot of times it would also contain all the liquid of that recipe. It is also unique because unlike the slow fermented nature of the other three preferments, this one is quick and explosive taking as little as 45 minutes to be ready.

Such a preferment is mostly used in enriched dough which does not requite that much acidity and complexity. It will still give the bread more character and improve the keeping quality further even though fats in enriched dough do that too.

One reason for a sponge being used in a recipe made with milk is the obvious problem that milk does not last well out at room temperature. I would not trust an 18-hour old poolish made with milk nor would I even consider making such a thing.

Unlike the other three preferments this one is the main leavening agent in the recipe so you really must not let it over ferment. A ripe sponge will have risen to near four times the volume.

Sponge is great in butter rolls, cinnamon buns, babka and the like.

Pâte Fermentée is a French term meaning fermented dough. It is also known as old dough. Although it is a French term, this preferment, and the method of making it is used all over the world. This is the only preferment that contains salt. The reason it contains salt is that unlike the other preferments which are intentionally made separately, pate fermentee is simply a piece of fully mixed dough which is pinched off before bulk proof and kept for the following day’s batch.

Such a method is especially convenient if you are baking often. Ideally every day, but it can be used if you only bake 3 times a week too. Of course, it can also be mixed separately like any other preferment and only used once. If you are going to use this method for baking only a couple of times a week, then refrigerate the preferment no more than an hour after pinching it off. It should keep fresh for a couple of days easily.

The hydration and all the other ingredient percentages in a pate fermentee will always be the same as in the main dough. That creates a problem in some cases as a regular dough has a regular amount of yeast so it will ferment far quicker than a poolish or a biga. It can take as little as 4 – 6 hours to be fully fermented.

To slow the fermentation, you can simply refrigerate it after a couple of hours of mixing and use it next time straight from the fridge. Do consider the final dough temperature control as a cold preferment will affect it.

Consider what kind of dough you want to use this method for. It is best suited for lean doughs which do not contain many ingredients. There should be no dairy products or eggs in a dough like this. Dried fruit of nuts would also not be advisable. If you want to use pate fermentee for a bread dough made with fruit and nuts or anything that can be laminated in, then simply pinch the dough before you add those ingredients.

The good thing about all preferments is that they are easy to make and easy to manage. A poolish, biga, or pate fermentee can be refrigerated to slow down the fermentation. There have been many times that something comes up and I can not make the bread right when the preferment is ready. I simply refrigerate it and that allows me to come back to it many hours later and still use it just the same.

It is a little different with the sponge as it contains so much yeast it would be difficult to slow it down before it over ferments, but still if it is a hot summer’s day and you need just a little more time, then mix the sponge and pop it in the fridge right away.

Temperature control is an important part of bread making.

It is even more of an issue when using a sponge which a lot of times contains all the liquid in the dough. If that is the case, then you must cool down your flour. Or you can lower the hydration of the sponge thus reducing the portion of dough that that the sponge makes up.

If you are new to the world of preferments, then I would suggest you go and experiment. Take what I have said and build on it. Most preferments are interchangeable and most bread can be made with a preferment. Find what suits your taste and your schedule.

If you understand baker’s percentage, then you are already able to convert any recipe to a recipe with preferment using the percentages I have given above.

I will make a video on how to convert any recipe to a preferment and I will link it here.

Do check out my Principles of Baking guide to learn more about the technical side of bread.