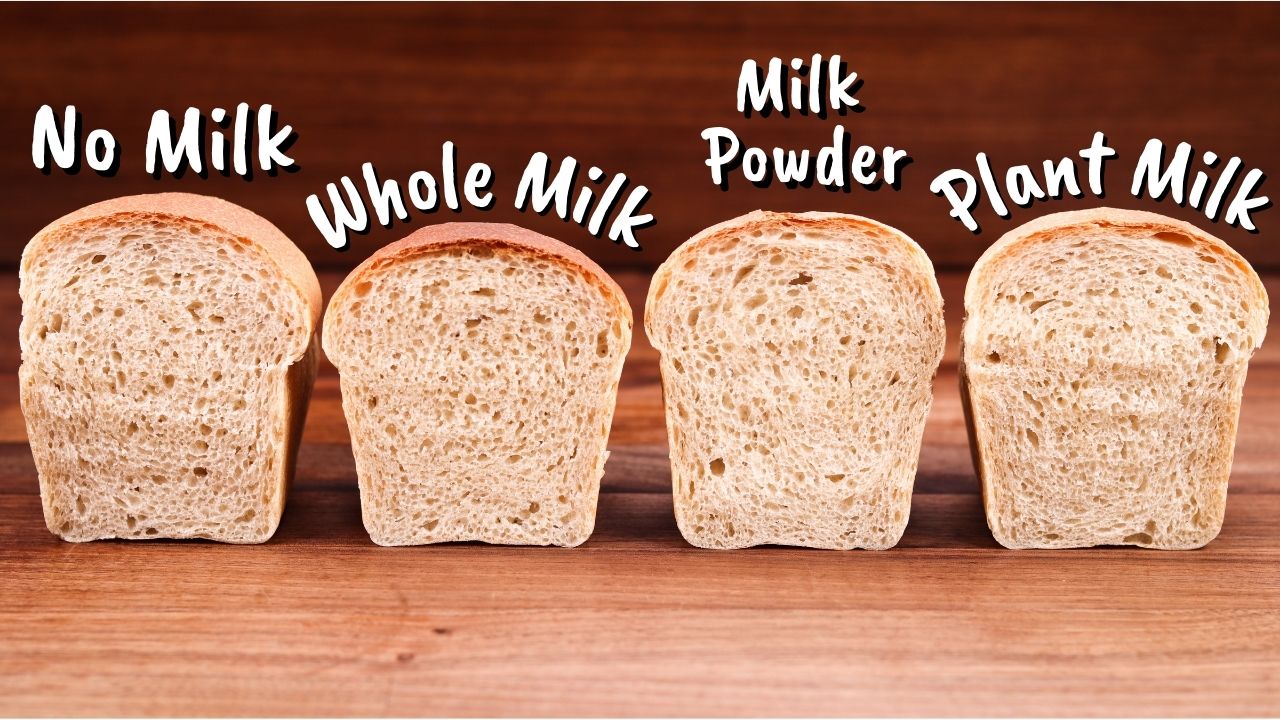 Milk is a common ingredient in breadmaking. But how exactly does it affect bread dough? And what alternatives are there?

Generally, milk is used in sweetened enriched dough like sweet rolls and burger buns. But a regular loaf of white bread can also sometimes be made with milk and no extra fat or sugar. How we use it is up to us after all.

There are a few kinds of milk out there. Most common is of course cow’s milk. There is also buffalo milk which is richer and fattier. Goat’s milk can also be used, but it has an unusual flavour so it may not be for everyone.

For the purposes of this test, I chose three kinds of milk. Full fat cow’s milk, cow’s milk powder. And almond milk just to see how it would compare.

Why use milk at all, you may ask. It adds nutritional value to baked goods. Mainly protein, calcium, and vitamin B12 which are all necessary for a heathy diet.

But we don’t only look for the nutritional benefits when using milk in our bread dough. The fat and lactose in milk help with tenderizing the crumb of the bread making it softer and sweeter. The crust of the bread also gets more caramelization. Be aware that bread made with milk should not be baked at too high of a temperature to prevent it from browning too much too soon.

There are a few numbers to be considered before we start writing a recipe that contains milk or milk powder. Mainly the fat, sugar, and water content of each.

Cow’s milk can range from 0.1% to about 4% fat depending on whether it is skimmed or full fat. It can contain 3% – 5% sugar. And perhaps most importantly it is 90% water. To be honest I only realized this when researching for this video. I used to use milk and water interchangeably. As it turns out it can make a big difference. So, remember to increase the amount of milk when swapping out the water in a recipe.

At 27% fat and 38% sugar, powdered milk contains far more fat and sugar than fresh milk. Those numbers may look high, but they soon drop after we dilute the powder in water. As a rule, milk powder should be mixed with water at a 1:10 ratio. Once mixed it in fact contains less fat and sugar percentage wise than full fat milk. It is worth noting that powdered milk also contains water at around 3% – 4%, but it is not significant enough, so we do not have to adjust the hydration of the dough.

The almond milk I used was 0% sugar, 1.1% fat, and it is made up of 98% water. This is a great option for when you want to keep the sugar content low whilst keeping the nutritional value high. It contained a lot more vitamins than cow’s milk. This is because they can be added during the manufacturing process. Other plant-based milk has other vitamins and different sugar & fat content so always check the label.

Armed with this information we can proceed to writing our recipes. I made four loaves of bread – one with water as a benchmark and three containing the milk mentioned above.

All doughs were kneaded for around 3 minutes and the final temperatures were within 1C (33F) of each other. Bulk fermentation was 2 hours with one fold halfway, then right to final shaping and around 2 hours final proof. Baked at 180C (355F) fan off for 30 minutes.

What did we find?

The crust of the breads containing full fat milk and powdered milk was clearly darker and crispier than the others. This is due to the sugars caramelizing. The crust of the almond milk bread was quite like the one made with water (at least colour wise) although slightly crispier.

When it came to the interior the bread made with fresh milk had the most uniform crumb with the bubbles spaced out evenly. It had a nice creamy crumb, but it was not extremely different from the others. Like I said milk is normally used along with more fat and sugar in a recipe so the result in such a bread is far more pronounced.

Moving on to the bread made with milk powder. It had a light and fluffy crumb, and the almond milk bread was extremely like it. But to be fair they were the ones to ferment most rapidly so the rise and the fluffy crumb is more likely due to that. Flavour wise the milk powder bread tasted almost the same as the fresh milk bread. The almond milk bread did not taste like almonds surprisingly enough. Perhaps other plant milk can be used for flavouring. Coconut milk comes to mind.

What is the verdict? Should you use milk in breadmaking?

Absolutely! Nutritional benefits are always welcome no matter what you are baking. A nice, caramelized crust looks great. Creamy, soft, and even crumb is perfect for most of our enriched dough favourites. Use it alongside other ingredients like butter, eggs, and sugar to maximize the effect.

Plant based milk is a great alternative for added nutritional value. This can also be elaborated and made into an awesome enriched dough with plant-based fats and sugar added. And the choices of plant-based milk these days are plentiful so there is a lot to be experimented with.

Do you use milk in breadmaking? What recipe is your favourite?

I hope you found some value in this video and I could answer some of your questions. Don’t forget to check out more of the Principles of Baking playlist which is full of information like this.