Home 9 Principles of Baking 9 1 Dough vs 15 Glazes. Which one do you like most? 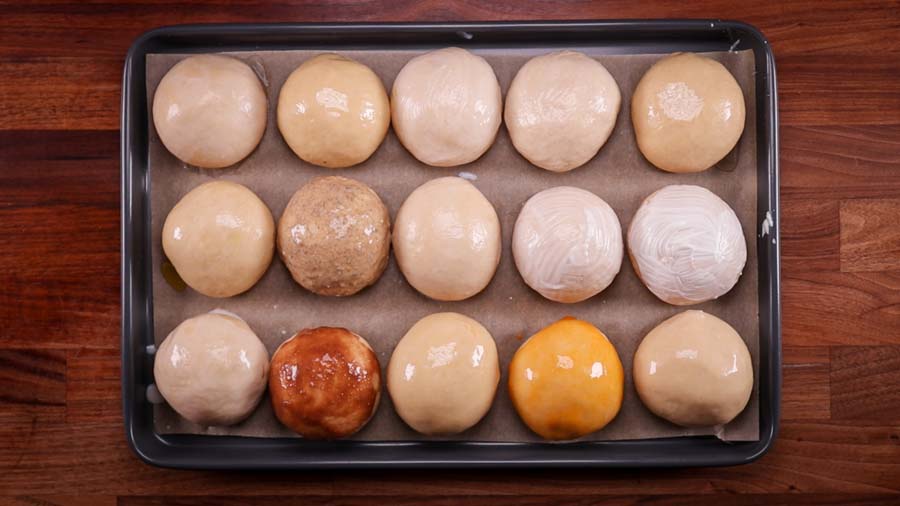 Comparing 15 glazes on one dough was quite a fun experiment with surprising results.

We all know the most common ones like egg, milk, oil. But you could make dozens of different glazes with various ingredients and then even more once you start mixing them with one another. There are literally hundreds of options.

But why use a glaze at all? Not all breads benefit from it. Most whole loaves of bread are not glazed. The crust is supposed to be ‘naked’ and natural. Not glazing lets the crust dry out more and become crispier (although some glazes will do that too).

Most of the time a glaze is used for enriched dough. Breads that are made with fat, eggs, milk, and sugar are elaborate in texture and flavour and a glaze can elevate that even further. Also, a soft and shiny crust is usually desired on those kinds of breads.

Smaller loaves and rolls benefit from a glaze too as it can help with keeping them moister and softer for longer. Most glazes help the dough expand more as they moisten the crust preventing it from setting too soon.

Let us not forget about the glazes that can be brushed on after baking. Hot sugar syrup gives extreme shine and sweetness. A jam and water mix and enhance pastries. Honey or other sweet syrups can be used to similar effect. Oil can soften and give a nice shine. Just naming a few here.

I chose some of the most common ones to compare side by side, but I also chose some more unusual ones to keep it interesting. Some of them require preparation. You will find all the ingredients and specific methods below.

All the above can be modified and adjusted. Eggs can be mixed with water, milk, added sugar, etc. The ratios can be adjusted in the cooked toppings and other liquids used instead of water. The panettone glaze can be made with different nuts and without the cocoa if not desired. All the milk glazes can be mixed with flavourings and coloured to your heart’s desire. And of course, there are many other glazes that I have not even discovered yet.

But which one is your favourite? Which one do you use most often and why? Let me know!

And don’t forget to check out the Principles of Baking playlist for more videos like this one.