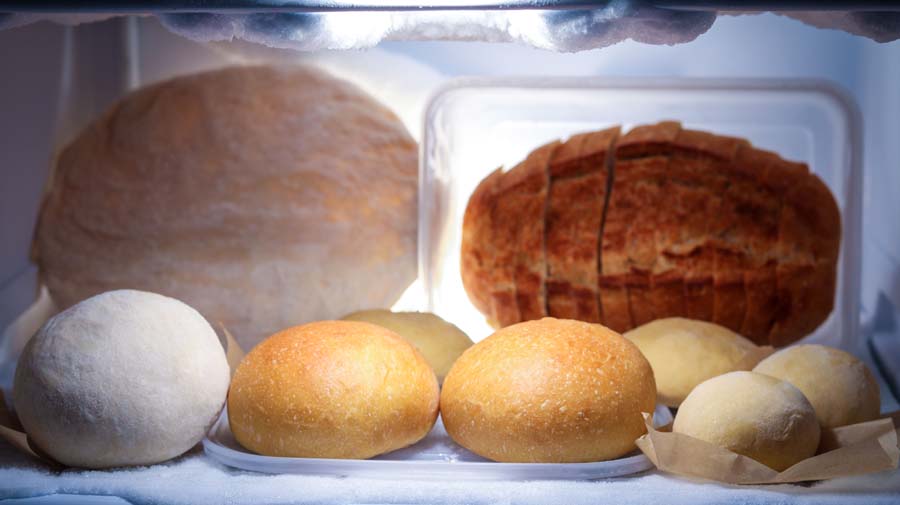 Freezing bread dough. Sounds simple, but there are always things to look out for. Many people have been asking me about this and I was quite curious myself. So, let’s do some experiments.

Convenience is the main reason to freeze bread for both home bakers and professionals. It can be convenient to make a large batch of dough and freeze it in handy portions to grab whenever needed. It can also help with fitting baking around a certain schedule.

Before I filmed this video I had never frozen bread/dough, so this was an experimental journey of discovery for me. As many of the videos I make are.

We will compare three different breads which I thought are most suitable for freezing and which would be the ones that people would most likely want to freeze.

Brioche. It is quite rich and would probably hold up well against extreme temperatures. It is also a super versatile dough from which you can make pretty much anything, but burger buns are probably the most common and they are certainly great candidates for freezing.

Pizza. Working in a professional kitchen which does not specialize in pizza production I have found that it can be quite inconvenient to make pizza dough while trying to prepare all other foods for lunch service. It would be far easier if I could make a large batch, freeze, then thaw and use. Same goes for home baking.

Lastly, regular sliced bread for toasting. Most people already know about this one. Slice your bread and freeze it. Then toast the slices straight from the freezer. It works perfectly. And it is a great option for someone who is busy but wants to have fresh toast for breakfast every day made from homemade bread.

Naturally, the first question I had was – at which point during fermentation do I freeze the dough? Let’s forget the toast bread for now and let us look at some possible options for pizza and brioche.

Next up was the question on how to effectively freeze and store the dough without ruining it. The main concern here is freezer burn or drying the surface of the dough which would be a defect. Which kind of container would be best? Or should we use plastic wrap instead?

Any airtight container works just fine. Using some parchment paper makes the dough balls easier to handle once defrosted. Clingfilm is not the best option as it degrades in extreme temperatures, and it can break up in smaller pieces. We do not want it ending up in our bellies.

Condensation is another thing to look out for. If the kitchen and the rolls are warm, then placing them in a sealed container and straight into the freezer may cause some condensation and ice formation on the bread which we would like to avoid. This is especially important with the half-baked dough as that needs to be cooled down completely before freezing. You could even place the dough into the fridge before placing it in the freezer.

Now to the defrosting part. All the dough can be defrosted at room temperature. Ones that need proofing after defrosting take quite some time between defrosting and until they are fully fermented ready for baking. Both the brioche and pizza doughs took around 5 – 6 hours so that is something to consider since we are looking for convenience. Another option is to place the dough in the fridge to defrost and get back to it whenever you are ready to bake. This way the is no need to look after it.

What did we find? In my experiment the winning method for brioche was the half-baked approach. It had the best crust and crumb, and it was the most convenient as you can finish baking it straight from the freezer. It only took 10 -12 minutes.

When it comes to pizza, the fully fermented and stretched dough was a failure. Perhaps there is a way to do it better, but that is for someone else to find out. My pizza took too long to colour in the oven, and it did not have very good oven spring. The one that was frozen after final shaping on the other hand came out pretty good. It took many hours to defrost and proof, but you can’t argue with the much better result.

The sliced toast bread behaved as expected. You toast in and it comes out nice and fresh, soft in the middle and crunchy on the outside.

You can find the pizza dough recipe here. The brioche recipe is the standard one I use for all my brioche projects. Here is the playlist.

Finally, the white loaf recipe can be found here.

And that concludes the freezing experiment. Do you freeze your bread? What is your method of choice? Which kind of bread do you freeze?

Don’t forget to check out the ‘Principles of Baking’ and ‘Steps of Baking’ playlists on my channel for many more interesting experiments and techniques.

For some reason I ate my pizza and forgot to update the post. The dough behaved normally. It rose well and it did not have freezer burn either. So, it is totally safe to leave it in there for a month. If a pizza dough could ever last so long without being made into a pizza 🙂