In simple terms mixing is the even distribution of ingredients throughout the dough. But of course, it is more complicated than just that. The mechanical action of mixing develops the gluten network inside the dough.

How does gluten work?

Gluten is created as soon as flour is mixed with water. Flour contains two proteins that work together to create gluten – glutenin and gliadin. Glutenin helps develop dough structure and elasticity. Gliadin gives dough the ability to be stretchy (extensibility). It is the balance between the two proteins that allows the dough to be stretchy without tearing and elastic without stretching too far.

The purpose of mixing is to achieve adequate gluten development so that the dough can stretch, resist ripping, and hold trapped gas inside whilst fermenting. A well-mixed dough will resist your pull and have good strength while at the same time be supple and have a bit of a stretch.

Why should you knead dough if gluten is created by simply mixing flour and water?

At first the glutenin and gliadin are jumbled up and piled together without a uniform structure. The motion of kneading (whether it be in a mixer or by hand) is generally comprised of repeated folds performed in the same direction over and over. It is this repeated folding process that reorganizes the proteins stretching them and rearranging them in straight lines.

Try pulling on a piece of un-kneaded dough and take note of the texture. It will be rough and sticky, and it will tear very easily. Comparing that to a fully kneaded dough you will notice that it is smooth and not nearly as sticky, and instead of tearing it will stretch and even bounce back.

The state of the dough represents the gluten structure. First it is a bunched-up mess with parts poking out randomly which make it sticky and fragile. Then it becomes uniform and smooth and able to be stretched long and thin. This is most apparent when performing a windowpane test.

Essentially, kneading is the process of gluten structure reorganization.

Click here for a video about hand kneading methods.

What about no-knead bread?

To skip the kneading step there must be something to replace it with. Folding is a method commonly used in no-knead bread production. All ingredients are mixed and left to bulk ferment. During bulk fermentation the dough is stretched and folded. Low hydration dough will require fewer folds than high hydration dough.

The stretching and folding method has the same purpose as kneading. Given a few folds a no-knead dough can be just as strong as a dough that has been kneaded.

In some cases, like with doughs that contain a lot of whole grain flour, kneading can even have a negative effect on gluten development. The pieces of bran in the dough act as little razor blades slashing though the gluten strands.

Why are we still kneading then?

Both methods have their upsides and downsides. Mixers were invented to help commercial bakers. Kneading dough by hand or by treading it with one’s feet can be extremely time consuming and exhausting. Folding a huge batch of dough can also be hard and impractical. A mixer solves the problem because it does not get tired, it is stronger, quicker, and more effective than a human could ever be. And thus, the baker can use his time and energy to get on with other jobs.

As with most technologies that are first used in commercial productions a dough mixer made its way into domestic use after a while. Even though as home bakers we do not have to deal with tons of dough we still like to let a machine do the work for us. Which is totally fine. If you can afford a mixer and if you really need/want it, then there’s nothing wrong with using one.

This channel is all about hand kneaded dough because most people don’t own a mixer. Kneading dough by hand can be more tiring for some than others. I always try and simplify my bread making process and if I can achieve the same result with a simpler method without compromises, then I will use that method. That is the purpose of this video. As with other methods comparing them side-by-side is the only way to see how effective they are and how they compare to each other.

Most (if not all) bread can be made without kneading.

The folding method is so effective because the dough has enough time to hydrate properly. If we tried to fold a recently mixed dough just a couple of times the result would be quite disappointing. That is why kneading usually takes a few minutes.

When dough is left to sit the flour has time to absorb more water and more gluten is created. Think autolyse. After a while when the first fold is performed the dough has already gained some strength and by performing the fold, we are making it even stronger and tighter still.

Any subsequent folds will strengthen it even further. It is as simple as that.

Low hydration lean dough could even be made with no folds during bulk fermentation. A pre-shaping and final shaping or even just a final shaping could be sufficient. Saying that, degassing can be quite beneficial and is advisable.

Some higher hydration doughs could require several folds on the other hand. I would say 80% and up should get at least 3 folds during bulk fermentation.

How do I convert my favourite recipe?

There is not much science to it. You just have to give it a go. One important thing to take into consideration is temperature control. Kneading dough raises the final temperature by quite a lot. Not kneading it removes that variable. I generally use room temperature water in my no-knead recipes. If your kitchen is quite warm or if it’s cooler, then adjust the water temperature.

Look at the ingredients of the recipe. Kneading helps mix all the ingredients throughout the dough. A few folds will be less effective at that, so you must mix everything as well as you can before you add the bulk of the flour. A whisk can be a good tool for this. If your dough contains butter, then you may need to melt it. Just make sure it is not boiling hot when you use it.

Once the dough is mixed all you must do is come back to it at equal intervals during bulk fermentation and give it a fold. The hydration of the dough will dictate the folding method required. Here is a video about folding methods.

This method is especially effective when combined with cold bulk fermentation.

On my quest to simplify and demystify baking I sometimes come across some surprising results. At least they are very surprising to me.

And now the fact that almost every bread can be made without kneading has made this journey so much more exciting and interesting. There is still much to uncover, and I will certainly come back and challenge more of the things I have said and believed in the past.

From now I am a total cold bulk fermentation convert. Preferments for me are thing of the past. I will use the no-knead method exclusively when making my comparison videos because it makes my life a lot easier, and it cuts out a variable.

Don’t get me wrong. I am not against kneading or using any other method. In fact, I enjoy kneading bread dough. It is up to each of us to decide how we make our bread.

Create your own style and have fun with it. The most important part is understanding the processes.

END_OF_DOCUMENT_TOKEN_TO_BE_REPLACED 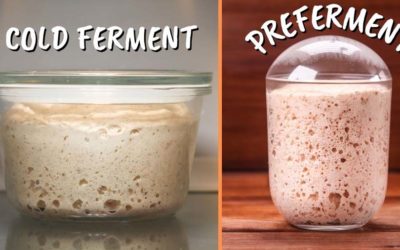 I am a big fan of preferments. The Breads With Preferment playlist on my channel has 30+ videos in it and there are quite a few recipes in other playlist using one preferment or another. The most...