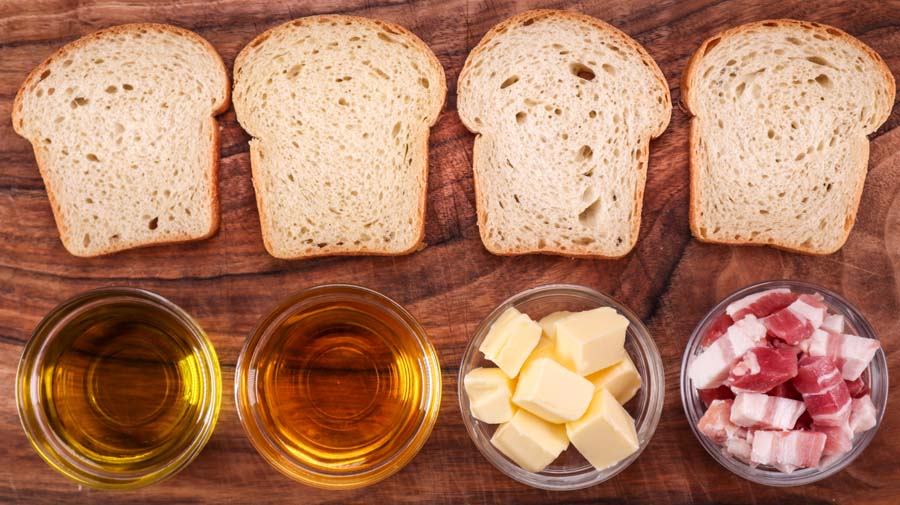 Fats used in breadmaking have different effects on the crust, crumb, flavour, and keeping quality of the final loaf of bread.

Every fat has its own flavour or lack thereof and some act differently than others when added to bread dough. Store bought lard (pork fat) can be totally tasteless and odourless. It will make the bread soft and pleasant to eat, but it will not add any notable flavour. If you want to use lard, then it’s best to render down some smoked bacon lardons to make your own. Then you will get the flavour benefit too.

Other animal fats can be the same as lard when it comes to flavour. You need to find the right one or make your own if you want it to taste like anything.

Oils on the other hand can have a great impact on flavour right out the bottle as they all have their unique taste. Of course, there are some that have very faint flavour or no flavour at all.

Perhaps the most common fat used in breadmaking is butter. It comes from an animal source, but it is not made from the fat of the animal rather the milk that it produces. Butter has a distinct flavour which can only be described as buttery. I’m sure you know what I mean. It is a solid fat with a melting point at just below body temperature. That is what gives it that smooth mouthfeel when eaten. The same applies to animal fats.

All fats coat flour shortening the gluten strands and making the crumb of the bread softer and lighter. Gluten is made up of two proteins called glutelin and gliadin. It is when those proteins connect that gluten is formed. Fats coat the flour inhibiting the formation of long gluten strands. That is why fat is called shortening.

Fats can be solid, soft, or liquid. The way they are used will depend on the state they are in. Some can be easily manipulated into a different state while others cannot.

Butter is one of the fats that is commonly used in all three states. It can be hard and solid when used in brioche dough because it must be cold to keep the dough temperature in check. The mixing time of brioche dough allows for the addition of a solid fat as it will have time to be worked into the dough.

Butter can also be used in liquid form the same way as oil is used by pouring it into the dough mixture and proceeding to the kneading step. Although, this is not a common way to use butter. The most common state that butter is used in is when it has been softened by leaving it out at room temperature.

The amount of fat used in a recipe will dictate how it must be added to the dough. 10% or less in baker’s percentage can most of the time be added straight from the beginning.

Anything more than 10% especially for higher hydration dough should be added later in the mix after some gluten development. I have made a whole video about adding fat to bread dough which you can find in the Principles of Baking playlist on my channel.

It is easy enough to work soft butter into a dough that has been kneaded for a while. But this may pose a problem when using oil as it could get quite messy and inefficient since oil acts as a liquefier.

In the case of using a larger proportion of oil it may be advisable to count the oil as part of the hydration of the recipe. That way it is safer to add into the dough from the beginning even if it is more than 10% in relation to the flour. I rarely add more oil and if I do, then it is significantly more than 10%. There is another way of incorporating larger amounts of oil – folding. I describe this method in the video mentioned above.

In this experiment I decided to use two oils (olive & rapeseed), butter, and lard. Just because they are the most common fats that I use in cooking and baking on a regular basis. I stuck to 10% so that I could add them all from the get-go and to see whether a relatively small amount would make a noticeable difference in the final product.

While the oils and the lard are 100% fat, the butter is only 82% fat with the rest made up of water and milk solids. This technically raises the hydration percentage of the butter loaf by 1%.

They all felt the same when kneaded. The stretch & fold method can be handy when working with fatty dough, but the regular method works too. Throughout the whole process of fermentation, folding, pre-shaping, final shaping, and handling in general the doughs felt pretty much the same.

Only when baked we can see some differences between them, and even then, it’s mostly on the inside. Predictably, the rapeseed oil bread had a more golden coloured crumb as it is quite yellow by nature. The crumb structure of both the olive oil and rapeseed oil breads was quite similar. Tightly packed little bubbles and a spongy texture.

The butter and lard loaves had similar insides to each other. More open with larger bubbles. With the butter loaf being the clear winner in volume.

When it comes to aroma the oil breads did not have a distinct smell. The lard loaf was a little baconey (if that’s a word). The one bread that did excel here was the butter loaf. It had a nicely rich and buttery aroma.

Flavour wise the oil loaves had a faint taste to them. I could make out a difference when comparing them side by side, but I’m sure if I had them separately it would be hard to tell. A large amount of oil should be used for maximum flavour.

The lard loaf had a slight porky flavour which I would recognize if it was on its own. It had a nice mouthfeel too. Lastly, the butter loaf was the most flavourful and it had the best mouthfeel of all in my opinion.