Why Do You Have to Punch Down Bread Dough? Degassing Explained

Home 9 Principles of Baking 9 Why Do You Have to Punch Down Bread Dough? Degassing Explained 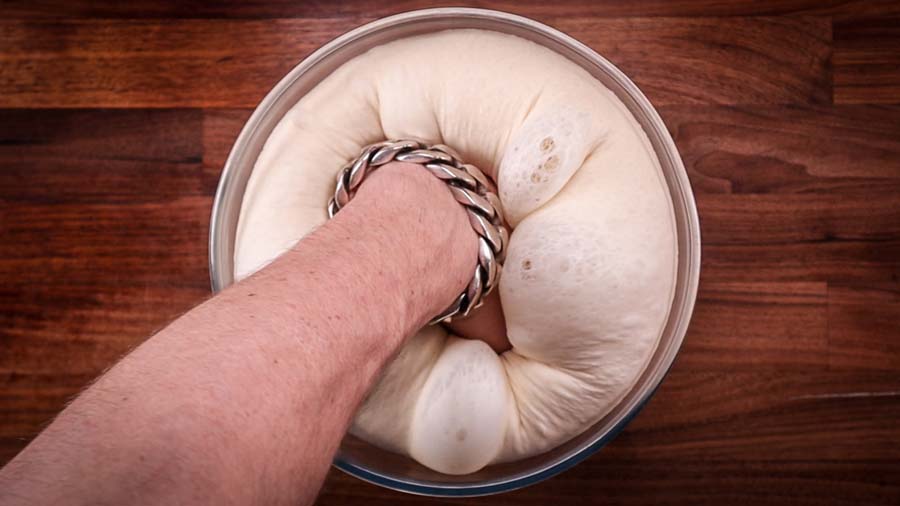 It is common to see instructions for degassing or punching down bread dough. But what does this step achieve and what would happen if it was skipped? Degassing, folding, dividing, pre-shaping and final shaping all go hand in hand.

Most commonly the degassing step would be performed half-way through bulk fermentation which is the first part of fermentation during which the dough develops most of its flavour. This step is often accompanied by a fold. The dough gets degassed as the fold is performed.

I have made a full video on folding, so we will not go too much into detail here. But in short, folding helps strengthen the gluten structure and build tension into the dough which is especially beneficial for looser doughs. It can also equalise the temperature of the dough. As the fold is performed the outside of the dough gets folded into the middle. So, if there was a temperature difference between the surface and the middle, this would be equalized. Depending on the requirements of the dough it can be folded just once or multiple times during bulk fermentation.

The purpose of fermentation is to make the dough rise and become an airy textured and light loaf of bread. But no matter how gently you handle the dough, it will get deflated at least a little bit.

Why would we want to knock the fermentation gas out of the dough?

As the dough is fermenting the gas pockets inside it are growing larger and larger. The dough between the gas pockets can stretch thin and in time it can tear fusing the pockets of gas together in larger pockets of gas. If this process keeps going undisturbed the dough may end up with many large holes surrounded by denser pieces of dough. This is by no means a bad thing. A lot of high hydration dough is made to specifically have that kind of texture.

When we degas the dough some of those larger pockets of gas get split back up into smaller ones. That is how we control the crumb texture of the final loaf. The more the dough is degassed the finer the crumb will be. Same goes for handling the dough during pre-shaping and final shaping. The more it is flattened and the tighter it is shaped the more even and tight the crumb will be.

It is up to the baker to decide what the crumb should be like.

It is not all about aesthetics and texture though.

Degassing is a great way of controlling the rate of fermentation. As you will see in the video, the dough that was not degassed rose to the same volume as the other ones quite a lot quicker. Knocking out the fermentation gases allows the yeast to fill the dough back up again. We essentially make it start over. Letting the dough ferment for longer develops better flavour and texture.

The built-up old carbon dioxide impairs fermentation. You may have noticed that after degassing the dough it starts fermenting more rapidly. If the dough is not knocked back the fermentation rate slows down as time goes by.

Of course, there are only so many times that you can knock it back and expect it to rise again. But in most cases, we don’t have to worry about it as there is no good reason to degas the dough multiple times during bulk fermentation. Although, it can be used as a tool for prolonging the bulk fermentation stage.

What differences were there between the four breads?

I made one dough and split it up into four equal pieces. One was shaped and placed in a tin right after mixing and left alone until it was baked. Another only got a final shape and final proof before being baked. The third one was pre-shaped after bulk fermentation, left to rest, and then shaped, proofed, and baked. The final one was made in the standard way by getting folded half-way through bulk fermentation, pre-shaped, rested, shaped, and proofed before baking. They were all fermented to the same volume.

The first dough rose the fastest as mentioned above because it was not knocked back. As it baked it did not rise much further because the fermentation had slowed down towards the end. Another reason for such weak oven spring was the lack of tension and gluten strength in the dough.

We can see a clear progression in oven spring. The more times the dough got folded, shaped, and degassed the higher it rose.

On the inside there were some significant differences too. The first bread had larger bubbles in the crumb, but the crumb was quite dense compared to the others as the larger pockets were surrounded by denser areas.

The third one had larger bubbles in the crumb, like the first bread, but it had far greater volume and it was much softer than the first two. It was not knocked back during bulk fermentation, so that could have resulted in a more open crumb.

The final bread was handled the most, so it had the best oven spring. This handling and knocking back also resulted in a more even crumb with more small bubbles.

What is the verdict?

In my test I let all doughs rise to the same volume before baking to see what the differences would be. The results of this test are not intended to show which method is better than the other.

The more a dough is folded, shaped, and degassed the longer it can be left to ferment. It becomes stronger and more tense, and it can contain more of the fermentation gases. So, the second, third and final breads could have been quite different if I had let them ferment for longer.

How many times a dough should be degassed or folded is up to the requirements of the dough. And it is up to the baker who manipulates the dough to get to a certain result in the baked loaf.

It is advisable to at least degas the dough during bulk fermentation in almost all cases. A fold can never hurt either, so why not throw that in there?! I always fold my dough at least once.

As ever, I encourage you to try out several methods and find what you like best and what fits your taste and bread making style.

Finally, this is just a small sample experiment and there can be endless variables when it comes to different recipes. Some doughs can take more folds while others may tear. Some need folds or else they will be flat as a pancake.