Home 9 Principles of Baking 9 Cold Fermentation vs Pre-ferment I Which is Better? 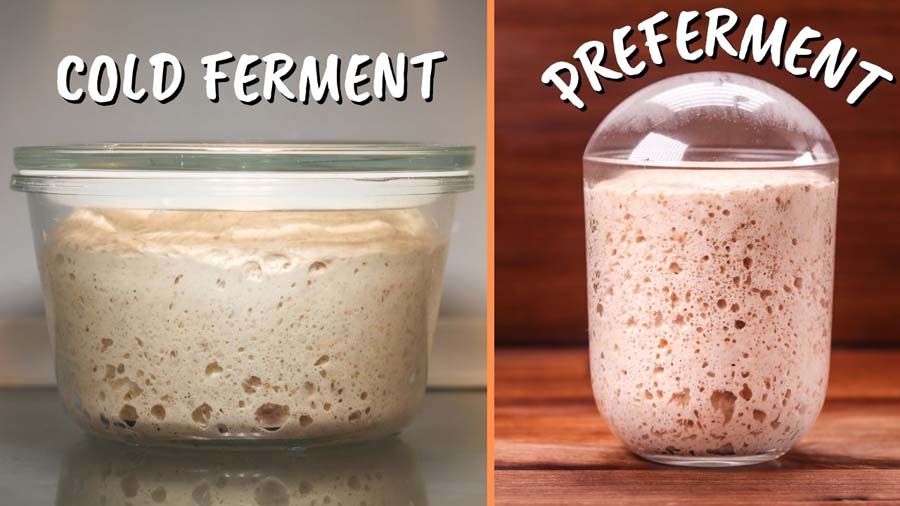 Why should you use a preferment?

Generally, preferments are used as a space and time saving method. It is one thing baking a loaf or two at home and having the space to leave the whole dough to ferment pretty much anywhere. It is a totally different story when it comes to bakeries. Producing hundreds of loaves per day a baker would need huge amounts of room temperature or cold storage space which is not practical or cost effective.

We all know that a longer fermentation produces better flavour, sturdier texture and results in a loaf that can stay fresher for longer. Taking a portion of the total flour of a recipe, mixing it with water and a tiny amount of yeast, leaving that mix to ferment for many hours, and then using this mix in a bread dough recipe mimics a long bulk fermentation in a significant way.

There are several different preferment types with the main difference between them being the hydration level. As far as I have tested, they produce pretty similar results in the end. There can be slight differences in crumb structure but taste wise they make the same bread if fermented for the same amount of time. It does not matter which preferment you use. What matters is how you use it and how you handle the dough that you use it in.

Since I learned most of what I know from Jeffrey Hamelman’s book I’ve always considered him my bread baking guru and I latched on to every single word that he said. He is of course a proper baker who uses and teaches professional baking techniques.

Over time I have developed my own style of baking and I have adapted those techniques to a home baking setting. And ever since I made my cold bulk fermentation video I have been using preferments less and less.

Why should you use the cold bulk fermentation method?

I started my channel with more complicated and varied methods and over time I’ve tried to whittle it down to the essentials and things that make most sense. Wrapping your head around various preferment types and trying them in different recipes whilst struggling to control temperatures and fermentation rates of each seemed a bit unnecessary to me. Even more so because after all they produce almost the same bread in the end.

Cold bulk fermentation reduces the number of steps you must take to make bread. It is more reliable because of the lowered constant temperature. Fermentation is slow and steady which allows for great flexibility when it comes to scheduling your bakes. Saying that, a preferment can be refrigerated and used later just as well.

A dough can be left to ferment in the fridge far longer than initially planned and most of the time the worst that can happen is that it will taste better which is also the best that can happen. Of course, fermenting the whole dough for an extended period will make it taste more intense than just fermenting a small piece of it and that is another great reason for using this method.

What were the main differences in my test?

It is fun to talk about which is worse and which is better between us because we all have our own opinions and preferences. Some people enjoy the extra step of making a preferment to create a ‘seed’ for a beautiful loaf of bread the next day. They swear by its effectiveness and pride themselves in mastering the technique. I fully stand behind that.

Personally, I like to do everything as efficiently as possible and if I can do that without compromising the result, then I will stick to such a method. This is where my comparison videos come in. Only by baking the same bread with different techniques side-by-side can we really see the differences between them and analyse the results and appreciate each method for what it is.

Both breads in the video contained the same amount of ingredients. 200g white bread flour, 20g whole wheat flour, 150g water, 2.5g instant dry yeast, 4.5g salt. Both took the same amount of time to produce. Both were made with the no-knead method.

I deliberately use the no-knead method for these comparisons to cut out a variable. But even if both were kneaded, I can say with confidence that the cold fermented dough would be much easier to handle. It was a lot less sticky and had a firmer texture. This is all thanks to the flour having more time to absorb all the water. Another win for the cold fermentation method in my opinion.

Some would say that a firmer texture is a disadvantage, and it would produce a chewier and perhaps heavier bread. That can be true, but it would not be the fault of the method rather a fault of the baker making that bread. Because the cold fermentation method can allow for higher hydration you can simply use more water to make yourself a lighter bread.

When it comes to flavour and texture there were some significant differences. The cold fermented bread was far more intense and flavourful. In a blind taste test, you would instantly recognize which is which.

Texture wise the cold fermented bread was slightly chewier and denser. Both taste and texture are of course highly subjective.

For me the cold bulk method is the clear winner, and I will be using it pretty much exclusively from now on. It tastes better to me, it saves time and effort, it is more predictable and reliable, and it allows for greater flexibility when it comes to scheduling.

The dough is easier to handle, and this allows for more applications of the no-knead method which makes the whole process even simpler still. As far as I can tell there are no disadvantages to cold bulk fermentation unless you don’t have the space in your fridge. But I don’t see most people having that issue.

I will still use a flying sponge for a quick same day bake especially for enriched dough.

What about long bulk fermentation at room temperature?

There is a video in which I compared bread made with a preferment vs a slow room temperature bulk fermented bread. The results were the same as here. The whole dough was more flavourful. The problem I personally have with extended room temperature fermentation is that it is not as predictable or reliable because the temperature of my kitchen varies throughout the day/night.