What Effect Does Egg Have on Bread Dough?

Home 9 Principles of Baking 9 What Effect Does Egg Have on Bread Dough? 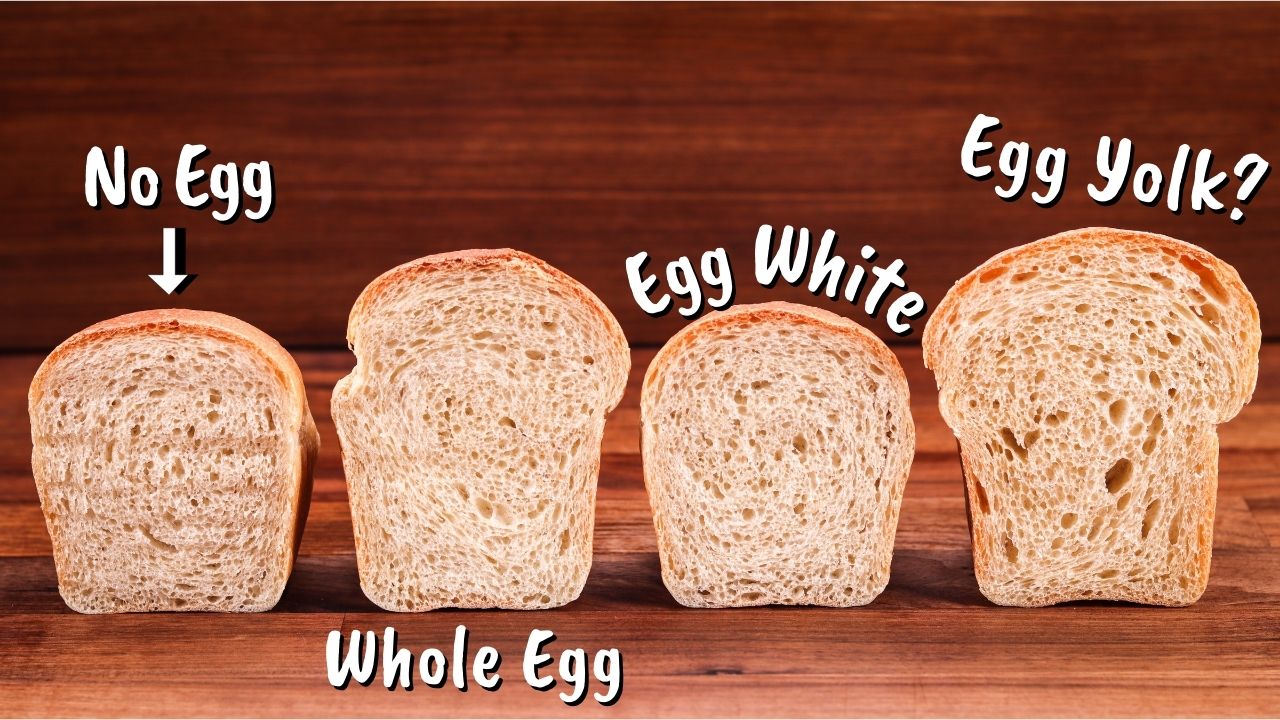 We all use eggs in our bread dough from time to time. But do we ever question the effect it may have on the dough? And which part of the egg does what?

These questions have been increasingly popping up in the comments section under some of my videos. And I started asking the same question myself.

Usually, the same bread dough that contains egg also contains sugar and fat. So, it is more used in enriched dough – be it brioche buns or cinnamon rolls. Most of the time they all contain the whole egg.

I decided to make four breads and I kept it simple with just flour, water, yeast, and salt. One was made without egg as a benchmark. One with a whole egg. One with just the egg white and the last one with only the yolk.

But perhaps even more importantly than the calculation is the question of what the egg brings to the final product?

Eggs are extremely nutritious. They are packed full of vitamins and protein which are all beneficial and necessary to our diets. And that is as good of a reason as any for adding eggs to bread dough.

But besides the nutritional benefits there are a few other good reasons to use egg in breadmaking. It makes the bread lighter and fluffier. The reason for that is the fat in the yolk that inhibits gluten formation just as any other fat would. This results in a looser dough that can expand and puff up more.

The egg white on the other hand acts as a coagulant and sets the crumb making it bouncier and chewier in a good way.

Crust is another part of the bread that is greatly affected by egg. It caramelises more and becomes crispier. Breads that contain egg should not be baked at very high temperatures as the crust may go too dark too soon.

Eggs also add flavour which works well in enriched dough. The yolk is the part that contributes to the flavour mostly as the white is quite bland by itself.

But not everyone can or will eat egg. What alternatives are there? You can make bread dough light and fluffy simply by using any other fat rather than egg yolks. Sugar and milk will also act in a similar way. A roux like tangzhong makes bread super light and fluffy too. To achieve a bouncy crumb that an egg white would provide you could use some potato starch or cornflour in your flour mix. Check out my Pain de Mie recipe for a great example of this.

But back to our four loaves. It is work noting that the ones which contained whole egg and egg yolk were the stickiest ones and it affected kneading and general handling of the dough.

It is not a big deal when making a relatively low hydration dough, but wetter doughs would become significantly more difficult to handle. There are of course ways to counteract that.

The first one without egg contained 78g water.

The second one had a whole egg which weighed 50g. The egg was made up of 37g water, so I only needed to add another 41g water.

The third dough was made with the egg white only which weighed 36g and contained 32g water, so I added another 46g of water to the dough.

The final dough contained only the yolk which weighed 18g meaning that 9g of that was water. I added 69g of water to this dough.

All breads were kneaded for around 3 minutes, and they all came to a final temperature between 25.5C – 26.1C. The first one was cooler and the last one was warmer. I did this to make them ferment at the same rate.

All were proofed for 2 hours with one fold halfway. They were pre-shaped, rested for 20 minutes and shaped again before being placed in baking tins lined with non-stick paper.

Final proof took around 2 hours. The two breads with whole egg and egg yolk puffed up more quickly so I baked them first. All were baked at 180C fan off for 30 minutes.

The results were quite surprising.

And that concludes the egg test. I hope you found it interesting. I certainly learned a lot.

The greatest discovery for me was about how eggs affected the crust of the bread. I always wanted to make a loaf that was light and big but also had a super crispy crust and I never knew how to get it exactly like I imagined. Turns out the only thing you need is some egg yolk in the dough. Definitely going to use this trick in the future.

Be sure to check out more of the Principles of Baking videos for more interesting comparisons.